Home » Board of Directors » Application and Election Process

All applicants must meet the following eligibility requirements to be considered for a position on the AMUG Board of Directors and self-nominate by completing the application on the AMUG website by the deadline: January 18, 2023.

Must be prepared to participate as an active Director on the AMUG Board on a variety of levels.

Application and Election Process as outlined in AMUG Policy, Procedures and Governance Manual. 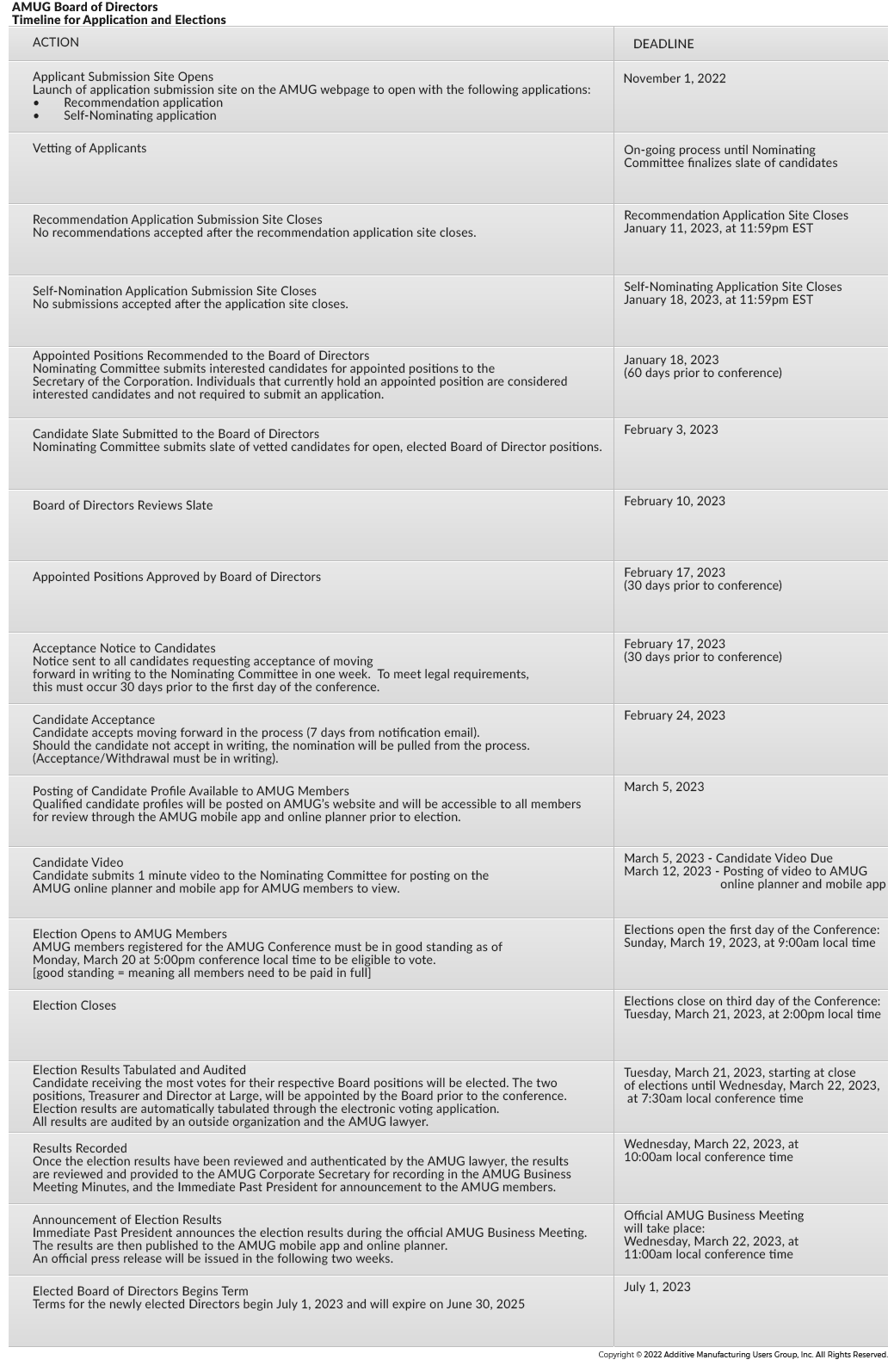 The recommendation period has passed.

The self-nomination period has passed.

Election of Board of Directors

AMUG members elect the President, Vice President, Secretary, Director-Education & Conference, Director-Event & Hospitality, Director-Membership and Director- Sponsors and Exhibitors from the list of qualified candidates issued by the AMUG Nominating Committee and approved through the AMUG Board of Directors slate process. The President, after completing their term, automatically succeeds to the office of Immediate Past President.

The election of the Board of Directors will be conducted through the AMUG mobile app, online planner, and in-person at the annual AMUG Conference. The ballot issued to AMUG members shall identify each candidate, the position they are seeking for election, their biography, current AM employment and a brief introductory video.

Each Board of Directors position is filled by the AMUG member who is the one (1) nominee receiving the greatest number of votes cast in each position up for election.

Fairness: All AMUG members should have equal opportunity to see elected positions on the AMUG Board of Directors.

Affordability: AMUG organization has implemented a “No Campaign” policy to provide a fair, equitable, affordable engaging and sustainable election process.  The “No Campaign” policy removes the act of individuals using monies to promote their interest in an AMUG Board of Director position.

Engagement: Communication with the electorate about the election process and the candidates should arouse interest in AMUG affairs and foster optimum voting. AMUG Board of Directors will provide all communications regarding the candidates, as well as opportunities for the AMUG members to meet and engage with one another at the AMUG Conference.

Appointment of Board of Directors

There are two positions that are appointed by the Board of Directors: Treasurer and Director at Large

Nominees for Treasurer are exempt from the “ownership” requirements defined in the AMUG Bylaws, and are exempt from the “same company” restriction, with the exception that the the Treasurer and Director at Large may not be from the same company. Nominees must be a U.S. citizen and adhere to a background check prior to appointment. Nominations for the office of Treasurer are to be submitted in writing to the Secretary by the Nomination Committee no less than sixty (60) calendar days prior to the annual AMUG Business Meeting. The current Treasurer is considered to have been nominated by virtue of holding the office.

APPOINTMENT OF DIRECTOR AT LARGE

AMUG Board of Director Term and Cycle

During an AMUG Board election, AMUG members select candidates based both on personal knowledge and the information submitted through the online application form. To adhere to the AMUG Election Principles, there is a “No Campaigning” stipulation.

“Campaigning” is any sort of activity whereby you encourage AMUG members to vote for a particular candidate during the AMUG elections. This includes but is not limited to social media (LinkedIn, Facebook, Twitter, etc.), emails (either specifically written emails, or signature lines such as vote for the AMUG Board”), postal mail, flyers, telephone calls, websites, or any other similar activity.

The following activities are prohibited because neither AMUG nor its sponsors, partners or members should appear to endorse any candidate for election.

While the AMUG organization cannot prohibit such activity, candidates are advised to refrain from using other email distribution lists (obtained from sources outside AMUG) for campaign purposes. Many recipients view such messages as intrusive or as unsolicited junk mail, and candidates employing such tactics run the risk of alienating voters rather than attracting them.

If you have any questions on these rules, please contact the Nominating Committee at nomcom@amug.com.

The nomination period has ended.