JACKSONVILLE, FLA., April 18, 2013 – The Additive Manufacturing Users Group (AMUG) today announced its 2013-2014 board of directors. Board members were elected at the annual business meeting held Jacksonville, Florida, on April 17.

The board will plan and organize the 2014 AMUG Conference, which will be held in the western United States. AMUG expects to select the location and announce the conference dates by mid-May.

Gary Rabinovitz, outgoing president said, “We are coming to the close of a very successful and well received 2013 conference. Attendees have commented that this is the best event they’ve ever attended. This success is a reflection of the hard work and dedication of the best group of volunteer leaders that I have ever had the pleasure of working with.”

Bret Bordner, incoming president, said, “I have no doubt that next year’s conference will be even better and significantly larger. Considering both the elected and appointed board positions, I have the advantage of leading a team that is predominantly the same as the one that supported Gary.”

The newly formed board announced three appointments: Vince Anewenter, Milwaukee School of Engineering, was named as treasurer; Todd Grimm, T. A. Grimm & Associates, was named as additive manufacturing industry advisor; and Mark Abshire, DSM Somos, was named as advisor to the board, a newly created position.

At the conclusion of the meeting, the board also announced that Graham Tromans, G. P. Tromans Associates, and Stefan Ritt, SLM Solutions, will stay on as European liaisons. Ulf Linde, netfabb, was also named as a European liaison. 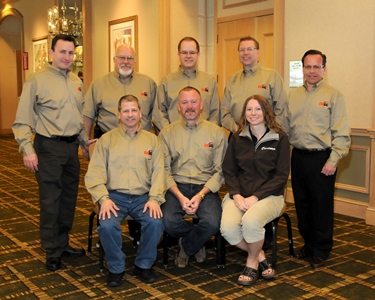