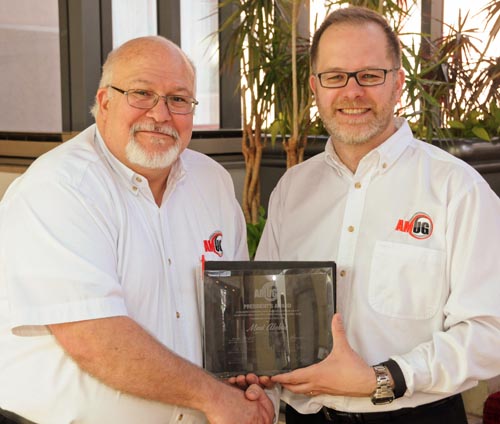 ST. LOUIS, MO., April 26, 2016 – At its 28th annual conference, the Additive Manufacturing Users Group (AMUG) presented Mark Abshire of Computer Aided Technology Inc. (CATI) with its President’s Award. Abshire, the seventh to receive this prestigious award, is an applications engineer for CATI and advisor to the AMUG Board. Abshire received the award that was presented by Mark Barfoot, AMUG’s president, during the conference’s opening session before 1,061 attendees from 24 countries.

Barfoot said, “AMUG presented Mark this award in recognition of his years of service for the advancement of the users group and his contributions that have grown the organization.” In his presentation, Barfoot noted that Abshire has been an avid and active promoter, supporter and contributor to the additive manufacturing (AM) industry since it was born nearly 30 years ago.

Abshire said, “I was very surprised to receive the highest award that AMUG bestows and equally honored to be counted in the company of the people that have earned this award before me.” He continued, “It has been and will continue to be my pleasure to serve the Additive Manufacturing User Group and the AM industry.”

Abshire had served two terms as an AMUG vice president and later agreed to serve as secretary when there was a vacancy on the board. He has remained active on the board as an appointed advisor in the years that followed and currently serves as an AMUG advisor with responsibilities for conference registration.

Barfoot concluded his award presentation saying, “I know Mark likes being behind the scenes and certainly doesn’t do any of this for recognition, but we just want to honor him today to show him how much he means to our group and that we appreciate all that he does.”