A panel of industry veterans selected Carlos Bolanos and Gary Rabinovitz, both of Reebok International, as the winners in the advanced applications category. Their submission demonstrated the application of additive manufacturing throughout the five-year development effort for Reebok CHECKLIGHT. CHECKLIGHT is a wearable technology that visually indicates cranial impacts that may have caused concussions. 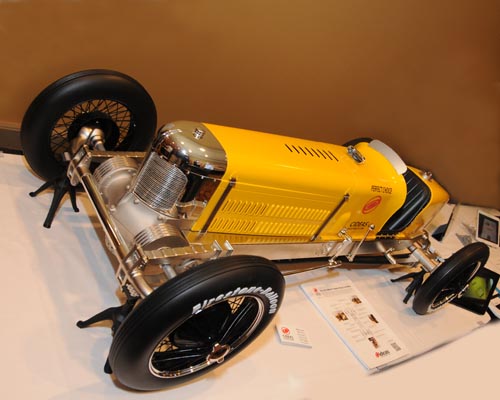 The Perfect Choice, a scale-model replica of a 1927 Miller 91, won the advanced finishing category of the AMUG Technical Competition.
photo by Ed Winters Photography

Eric Mutchler, project engineer at Solid Concepts, took the runner-up award in both categories for its 3D-printed metal gun, the first in the world. Mathew Olney, on behalf of the Nike Rapid Prototyping Lab, accepted the third place award in advanced finishing for the full-size, anatomically correct human leg and foot. Mike Littrel also received the third place award in advanced concepts for the 1927 Miller 91 race car.