CHATSWORTH, CALIF., April 23, 2014 – At its 26th annual conference, the Additive Manufacturing Users Group (AMUG) presented Gary Rabinovitz of Reebok International with its President’s Award. Rabinovitz, the sixth to receive this prestigious award, is Reebok’s RP lab manager and the users group’s past president.

Rabinovitz received the award, which was presented by Bret Border, AMUG’s president, during the conference’s opening session before 531 attendees from 15 countries. Bordner said, “AMUG presented Gary this award in recognition of his years of service for the advancement of the users group and his leadership that has grown the organization.” In his presentation, Bordner cited Rabinovitz’s role in transitioning the users group to a technology-neutral, industry-wide membership base.

“I was quite surprised and very humbled to receive the President’s Award,” said Rabinovitz. “Having had the pleasure of bestowing this award last year, I am well aware of the credentials and contributions of past recipients.”

Rabinovitz served as the organization’s president for two terms from 2012 to 2013, which was a critical transition period when the group expanded to include all users from the additive manufacturing industry. Previously, the group served only those that possessed stereolithography (SLA) or selective laser sintering (SLS) technologies. Rabinovitz also served as chairman for 3DSUG, the precursor of AMUG, at the time that the organization was in transition following a merger of users groups for stereolithography and selective laser sintering.

“Gary has invested more time in making AMUG a success than expected of any president,” said Bordner. “As past president, he has been more involved than any others before him. He has been tremendously supportive in helping me perform my duties as president.”

“When called upon to step up to lead and assist, Gary did so without reservation, going beyond what was asked of him,” said Border. “Most important, the users group is deeply rooted in friendship, and Gary is, above all, a true friend to everyone he meets.” 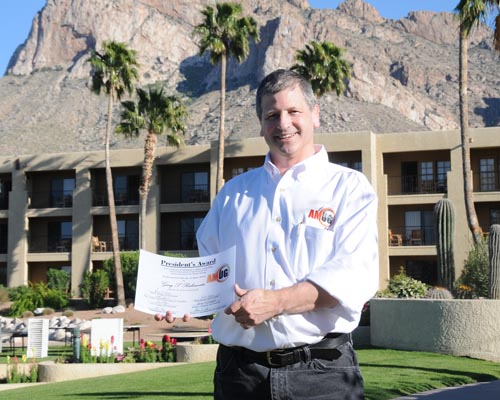 Gary Rabinovitz with the President’s Award at the Tucson, Arizona conference.
photo by Ed Winters Photography