CHATSWORTH, CALIF., April, 29, 2013 – At its 25th annual conference, the Additive Manufacturing Users Group (AMUG) presented Tim Gornet of the University of Louisville with its President’s Award. Gornet, the fifth to receive this prestigious award, is manager – rapid prototyping center operations at the university’s J.B. Speed School of Engineering and the users group’s past president.

Gornet received the award during the conference’s opening session before 365 attendees from 18 countries. Joining him on stage were three previous recipients of the award, eight past presidents and current president Gary Rabinovitz.

Rabinovitz said, “AMUG presented Tim this award in recognition of his exemplary vision, leadership and tireless years of service for the advancement of the users group.” In his presentation, Rabinovitz cited service, perseverance, passion, selflessness, professionalism and friendship as the qualities for which Gornet deserved the President’s Award.

“I was very humbled, and this award was totally unexpected. I have been very lucky to be involved in AM [additive manufacturing] for such a long time. I truly enjoy all the technologies, the AMUG and especially all the people I have been able to meet over the years through AM. I appreciate the honor and hope to continue to contribute back to the AM community,” said Gornet.

Gornet served as the organization’s president from 2011 to 2012, which was a critical transition period when the group expanded to include all users from the additive manufacturing industry. Previously, the group served only those that possessed stereolithography (SLA) or selective laser sintering (SLS) technologies. Gornet also served as chairman for the SLS users group prior to its merger with that for SLA.

“When called upon to step up to lead and assist, Tim did so without reservation, going beyond what was expected of him,” said Rabinovitz. “Most important, the users group is deeply rooted in friendship, and Tim is, above all, a true friend to everyone he meets.” 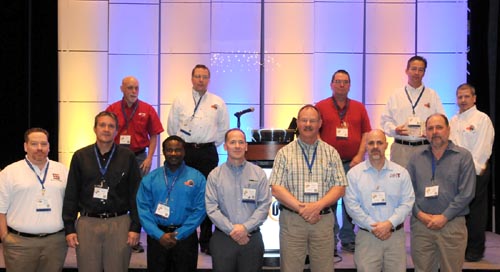 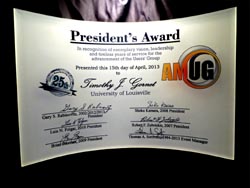