It was so great to see everyone at RAPID. A big thank you goes to those that stopped by the booth or stopped us in the aisles to tell us how much they enjoyed the AMUG Conference this year and that they are definitely coming back. It really does encourage the board to hear the feedback and pushes us to do it all over again for the 2017 conference. It was also great to touch base and hear stories of how you have taken what you learned back to the workplace. Many of you shared that you’ve already made a difference in your workplace with that information. As I had said in my wrap-up last month, we’re your support network between conferences; support that can make you the additive superhero within your company. So please reach out through the LinkedIn group if you have any questions or need help throughout the year.

The board will be convening for four days in June to put together our 2017 plans. If you have any suggestions, please send them to president@am-ug.com in advance of our meeting. The board is already starting the planning cycle, and now is the time to give us your thoughts so that we can try to incorporate them in next year’s conference.

Reflecting on our past week at RAPID in Orlando, Florida, it was great to connect once again with AMUG members, exhibitors and sponsors. We were also able to talk with many potential 2017 AMUG members that were looking to find out who we are and what the users group is all about. AMUG gets its strength from the expertise and passion of our members and continues to grow by word-of-mouth recommendations.

Anticipating continued growth, the AMUG Board will meet in June to plan the 2017 conference. While the next conference location is under negotiation, there is much to do and little time for rest!

If you are looking to get more involved in AMUG, there are opportunities to assist before, during and after the conference. There will be newly created opportunities in the form of subcommittees that guide AMUG into the future. A nominating committee is needed to provide a uniform structure to feed the leadership pipeline into the future. Another opportunity will involve a committee for developing policies and procedures. If any of these are of interest to you, please send me an email to request more details.

Reflections on the Conference

I arrived at the 2016 AMUG conference with a backlog of work that I hoped to tackle in my downtime, but I quickly found out that the only thing AMUG conferences don’t include is downtime. The conference was filled with valuable presentations and information that I plan to incorporate into the lessons I create for the classroom and into my own work. The conference organization and scheduling made it easy to meet and network with others that not only enjoy using the technology in many interesting ways but also enjoy modifying and building their own machines.

My past conference experiences had convinced me that sponsored sessions were always sales pitches, but there were presentation titles and descriptions at the AMUG Conference that I couldn’t turn down. These presentations proved my assumptions incorrect; I had never attended talks that were so worthwhile and chatted with presenters so open to sharing details. Dave Crenshaw (Alfred University) and Jesse Blacker (ExOne) were the first — a couple others included 3D Platform and Stratasys — and all provided me with usable technical information and direct answers to questions. The sessions from various topic tracks and hands-on workshops were just as helpful. Many of the sessions either had a direct impact on my planning for upcoming projects or my plans for further incorporation of AM into the classroom.

The wealth of technical information and experiences wasn’t limited to the conference sessions. The random-table-number lunches, the nighttime activities, the always well-stocked coffee and food breaks, and the rides to and from the amusement park event were all filled with friendly people that obviously enjoy their work and were willing to talk about it.

I left the conference with a renewed sense of excitement about AM and ideas on how to improve my own instruction on AM…and just as much of a backlog of work. 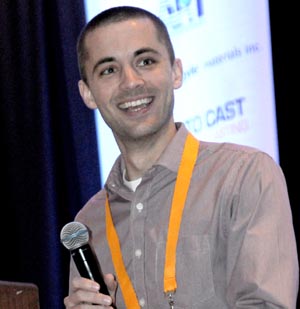 Nathan addressing the crowd after receiving his scholarship award.

Take a break from your daily activities and relive the 2016 conference by scrolling through the recently posted photo gallery. There are over 400 pictures, covering everything from keynotes to outings, for you to see. 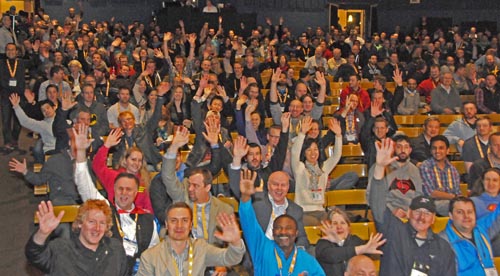 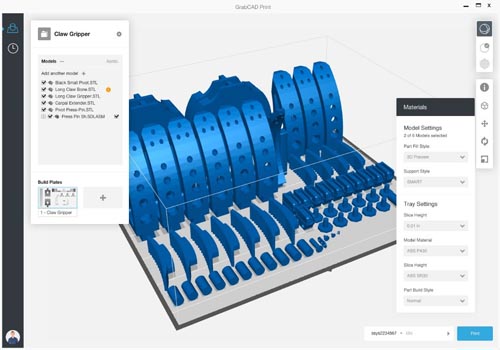 SLM Solutions has launched a new website that is the hub for information for those across the globe. Take a look at slm-solutions.com. 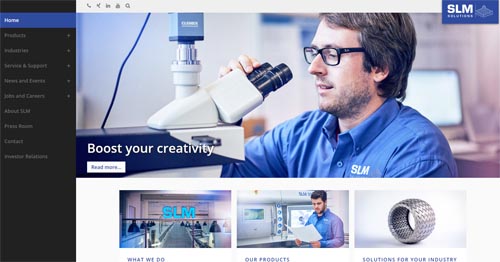 The new look and layout of SLM Solutions’ website.

Great to See You at RAPID

It was wonderful to see so many of you again in Orlando! We hope you had a chance to stop by our booth to experience Somos® Element — the latest innovative material for investment casting — or learn more about speeding up the Rapid Tooling process with Somos PerFORM. If you missed Kevin Zaras’ presentation on “Using 3D Printed Patterns to reduce Time-to-market Cost and Design Limitations”, feel free to contact Kevin to find out more.

Thank you for making RAPID a huge success! 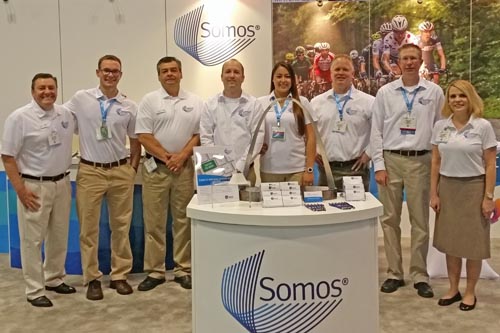 The world’s first commercial printer, the 3D Systems SLA-1, recently took its rightful place in history as an American Society of Mechanical Engineers (ASME) Historic Mechanical Engineering Landmark. The SLA-1 was developed in 1987 from the work of Charles (Chuck) Hull, the inventor of Stereolithography (SLA) and 3D Systems’ Co-Founder and Chief Technology Officer. The SLA-1 joins over 260 ASME landmarks around the world.

Hull invented SLA in 1983 with the first 3D printed part, forever changing the way we design and manufacture. In recognizing this innovation, ASME President Julio C. Guerrero stated, “SLA-1 is an integral piece of history in one of the world’s most promising technologies, and has profoundly influenced how we think and make.”

Still the gold standard in accuracy, SLA capabilities have expanded to include more materials and configurations. At the AMUG Conference in April, 3D Systems previewed its Figure 4 technology: ultra-fast, modular, Stereolithography designed for the automated manufacturing environment. 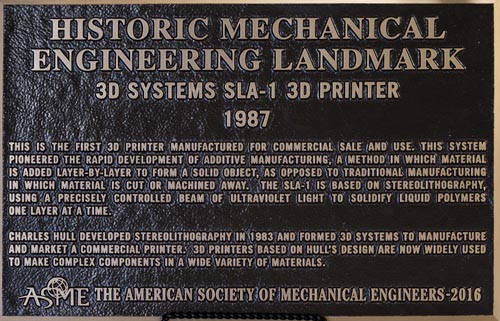 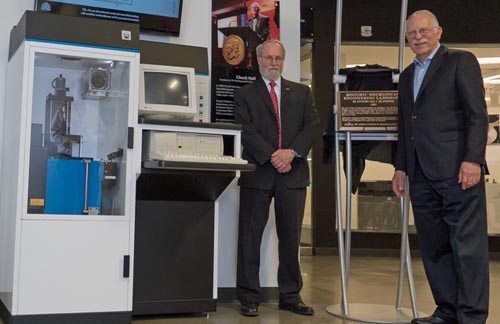 Concept Laser has expanded its sales and marketing team to support its rapid growth in North America. John Murray, president and CEO of Concept Laser Inc., talked about what is fueling this growth in this video filmed at by TCT at Rapid 2016. Please help us welcome the following to the AMUG community:

Read more about them on our website; they will also be at IMTS in Chicago in September.

The Concept Laser team (and friends) at Rapid 2016.

After jumping from stereolithography to laser sintering (LS) in 1994, EOS has become the most popular manufacturer of LS 3D printers in the world. The company currently produces two varieties of LS machines, one for plastics and one for metals. The EOS P 396 is a medium build volume machine capable of sintering a variety of plastic materials for prototyping and batch manufacturing purposes.

The EOS P 396 is an upgrade to the company’s previous EOSINT P 395 range, improving on its predecessor in terms of speed and efficiency. According to the manufacturer, the newer machine consumes 38% less energy and 3D prints up to 32% more quickly. This is in part due to the use of a new 70W CO2 laser; a low-wearing, high-speed recoater for dispersing powder; and a new point pyrometer, which measures the temperature of the powder to improve the precision of the recoating process. Featuring a build volume of 340 x 340 x 600 mm (13.4 x 13.4 x 23.6 in), the EOS P 396 can print objects at speeds of approximately 48 mm/hour (1.9 in/hour) with layer thicknesses as fine as 60 microns (0.00236 in). This all depends on the material used, however, of which this system can handle quite a few.

Read the entire article at ENGINEERING.com. 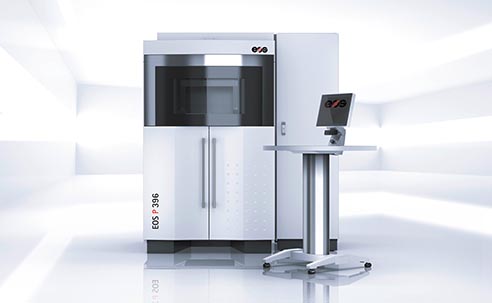 The 2016 RAPID Conference and Exposition was quite successful with huge launches from EnvisionTEC, HP and XJet, to name just a few. TCT has covered it all on tctmagazine.com and our YouTube channel. This year we reported on the event. Next year we will play a much bigger role. The 2017 edition of RAPID will represent something new for TCT, as we partner with SME for RAPID + TCT in Pittsburgh, Pennsylvania, in order to grow the event and help accelerate 3D manufacturing.

On the day after RAPID, some of team TCT are now home; others are stuck in an airport hotel, having missed a connection back to the UK. But wherever we are, we’ll be putting the finishing touches on both the European and North American editions of the magazine. And wherever you are located, you’ll have access to both the digital and physical copies for free. Subscribe here. 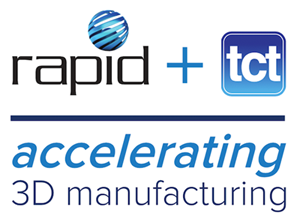